MITIE, the FTSE 250 strategic outsourcing company, has become the first ever Platinum Sponsor of the Cleaning Show 2015. 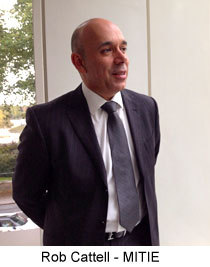 The Cleaning Show makes its move to London in 2015 following widespread industry demand, and MITIE recognised the impetus this relocation – as well as the organiser's plans to make this a true industry 'event' rather than just a trade show – will bring.

Rob Cattell, managing director of MITIE's Environmental + business, said: "MITIE has been a pioneer in the FM sector for over 26 years and we're excited to be the first Platinum Sponsor in the Cleaning Show's history, as well as supporting our industry at the heart of its main event."

The Cleaning Show 2015 takes place from 10-12 March 2015 at London's Excel Exhibition Centre. The event is organised by BCCE Ltd, a company jointly owned by the British Cleaning Council and Quartz Business Media.

Steve Diprose, VP of exhibitions at Quartz Business Media, said: "Attendees at the Cleaning Show 2015 will witness the transformation of an ordinary industry exhibition into an exciting industry-focused networking event, and I am delighted that MITIE has taken the opportunity to place itself at the centre of activities.

"We already have details of additional events to run alongside the show, including a number of social events making the most of London's attractions, a parallel programme of lectures delivered in two theatres, VIP areas to ensure visitors get the most from their visit, a number of specialist 'zones' on the show floor, together with awards and competitions. And that's just the beginning. We will be announcing another significant development in the next few weeks that will draw even more key industry figures to Excel in March 2015. I very much look forward to working with MITIE to further develop our plans, and thank them for their generous sponsorship."

Details of MITIE's sponsorship activities will be announced in the coming months, but in the meantime the company will be taking an active role, working with the organisers to ensure the visitor profile is enhanced, attracting attendance from contract cleaning businesses, FM companies, and property owners in greater numbers than at any previous Cleaning Show.