New research shows the number of food businesses in England, Wales and Northern Ireland displaying Food Hygiene Rating Scheme (FHRS) stickers and certificates has increased significantly for those with the top two ratings. 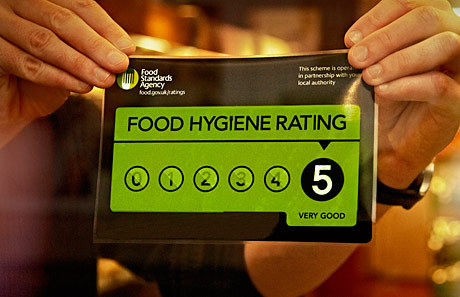 For those with the bottom ratings of 0 to 2, the number displaying these remains low. The research, which involved an audit and telephone survey, was commissioned by the FSA.

The findings are being used by the FSA to further develop its FHRS communications strategy and to inform policy development on display of ratings at premises.

The FHRS helps consumers choose where to eat out or shop for food by giving them information about the hygiene standards in restaurants, pubs, cafés, takeaways, hotels and other places you eat, as well as in supermarkets and other food shops.

The audit of a sample of business premises given a food hygiene rating as part of the FHRS was carried out in January 2013. The results showed that the number of businesses displaying their rating at their premises had increased significantly since 2011/12 to about a half – from 43% to 52% in England, from 31% to 47% in Wales and from 50% to 57% in Northern Ireland.

The increases resulted mainly from a greater proportion of businesses with the top two ratings – 4s and 5s – putting up their certificates or stickers.

By contrast, the proportion of businesses with ratings in the bottom half of the scale – 0s, 1s and 2s – displaying these remained low at about 10% in England, 17% in Wales, 13% in Northern Ireland.

For those with the middle rating of 3, the proportion displaying this remains at about a quarter in each of the countries.

Catriona Stewart, head of the food hygiene ratings team, said: 'Many of us make spontaneous decisions about where to eat, so being able to see the rating on the door or in the window is important. It’s encouraging to see that the number of businesses displaying the top two ratings is going up.

'But there is still a way to go. More of these businesses could be showing their customers that they take food hygiene seriously. We’re developing a toolkit to help them do this and make the most of their ratings.

'The more ratings on display, the better for consumers and the sooner the scheme can achieve its potential to improve public health.'