An end to dirty weekends at the Ritz 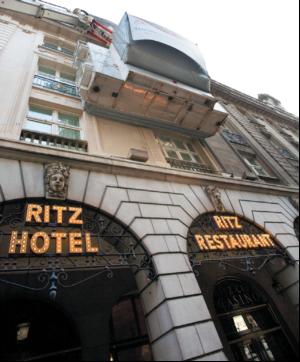 The Portland stone faÃ§ade on The Ritz, London's world famous, five star hotel, has been restored to its former glory in just three weeks using a remarkable masonry cleaning system. 3,600m2 of stonework was cleaned, without any scaffold, using an exclusive 'faÃ§ade gommage' system developed and provided by specialist Thomann- Hanry. It's claimed that conventional cleaning methods would have taken nearer six months to complete.

The Ritz is one of London's grandest and most celebrated hotels.Unfortunately, as the experience offered to guests inside the hotel has improved, weather and pollution have taken their toll on the appearance of the external faÃ§ade.Over time the British weather and pollution adversely affect virtually every building in every major city in the country.A quick look at the Bank of England's once pristine Portland stone walls will attest to this.

To bring the external appearance back up to The Ritz's high standards, its management selected Thomann-Hanry's cleaning system. Firstly, it is effective on brick, stone or terracotta, removing soiling that conventional methods leave behind.

The 3,600m2 faÃ§ade with its intricate moulding and decorative carving was cleaned in three weeks.

Finally, no scaffolding was required.The cleaning operatives gained access to the walls from a special cabin supported and manoeuvred by a crane on the ground below.

The benefit to the client was that room occupancy remained unaffected during the work, saving the hotel thousands in otherwise lost revenue.

The Thomann-Hanry system has been used to clean The Louvre in Paris, the Australian War Memorial in Canberra and the 56 storey MetLife building above Grand Central Station in New York. Back in London, it has also been used to clean Marks & Spencer's flagship store at Marble Arch, the Grosvenor House Hotel and Deutsche Bank in the City.

"We are delighted with the results," says Stephen Boxall,MD of The Ritz."We were particularly conscious that the work did not cause any inconvenience or disturbance either to our hotel guests or to pedestrians and traffic in Piccadilly.

"The efficiency and speed with which Thomann-Hanry were able to complete the project has been quite astounding."
MORE FROM THIS COMPANY
Send Enquiry
View Company Profile
RELATED ARTICLES