A report from think tank Centre for London, and charity Trust for London has revealed that only two employers in four years have been prosecuted for paying below the national minimum wage, despite more than 300,000 people in the UK earning less. 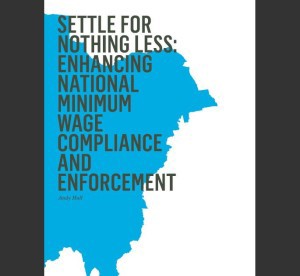 The new report, which uses unpublished data, says the figures point to a "systemic failure" in the way the national minimum wage is policed and calls for a more aggressive approach.

According to the study, "weak deterrents” and "excessive centralisation” have made national minimum wage enforcement "ineffectual”.

The warning comes less than a month after the Government launched a support service to help workers who are underpaid and announced it is cracking down on rogue employers who fail to pay staff the minimum wage.

A number of reforms have been recommended in the report, including:

Commenting on the findings, Andy Hull, the author of the report and an expert on low pay, said he was surprised that more companies had not been named and shamed by the Government: "We have had probably about 150 companies notified by HM Revenue and Customs (HMRC), but no names put out.

However, HMRC defended the apparent low prosecution rates, saying that its inspectors dealt with firms primarily through the civil route – with investigations, notices to pay arrears, and fines for employers – rather than criminal prosecutions.

Also commenting, TUC general secretary Frances O'Grady, said: "There must be no hiding place for employers who try to cheat workers out of a legal wage and bosses who avoid paying the minimum wage should face prosecution, naming and shaming, as well as tough financial penalties.

"While hard-pressed HM Revenue and Customs staff regularly recover more than £3m a year for workers on illegal poverty pay, it is clear that far too many unscrupulous bosses are still getting away with ignoring the minimum wage. This means that around 300,000 workers across the UK are not being paid what they should be."