Kenter, Husqvarna, Hako and Adlatus are the winners of this year’s CMS Purus Innovation Awards (PIA) 2019. 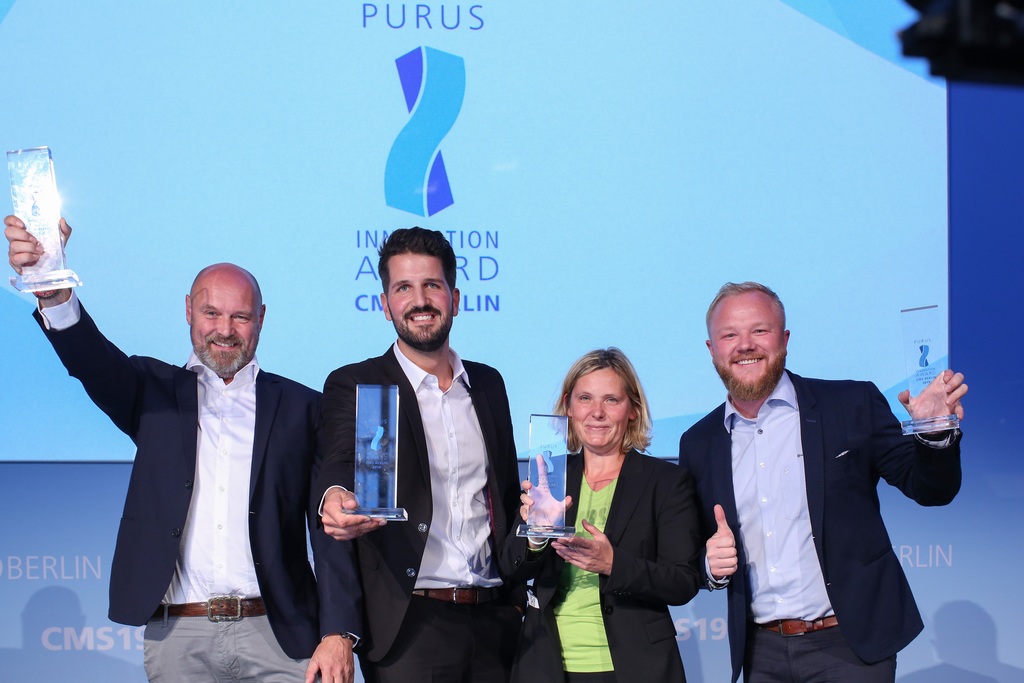 During the evening an independent panel of experts chose four outstanding innovations from exhibitors at the CMS show in Berlin, Germany, in the categories Large Machines, Small Machines, Equipment and Digital Tools and Systems. The PIA is considered to be among the industry’s most prestigious awards.

The presentation at the Marshall Haus on the Berlin Exhibition Grounds was the high point of the first day of the International Cleaning Trade Fair CMS Berlin 2019 – Cleaning.Management.Services., which will be taking place until Friday. The panel of judges gave the following reasons for their choice of winners:

The Comac C 85 NSC floor cleaner from Kenter is described as a genuine game-changer. Unlike conventional machines, in which the water has to be changed 20 to 30 times a month, the on-board treatment unit with its five-chamber system, never before used in this field, only requires one change of water per month. With this development Kenter is clearly demonstrating its commitment to sustainability, because the amount of water and chemicals used and discharged into wastewater systems is substantially reduced. This innovation is also said to be very interesting from an economic perspective. Quite apart from the fact that environmental aspects are becoming increasingly important in the industry when contracts are being awarded, this system reduces to a minimum the downtimes resulting from the need to change the water. This is a highly effective way of cutting costs, especially where waste treatment facilities are restricted.

The Automower 535 AWD from Husqvarna can operate on extreme gradients of up to 70 per cent, while ensuring that the highest safety standards are also maintained. One of the decisive factors in the decision to present this award to the world’s first fully automated, all-wheel drive lawnmower was the consistent way in which it complies with fleet management demands. The number of controls on this unit has been kept to the absolute minimum. All settings, such as the mowing height, mowing times, starting, stopping and parking, are carried by means of the Husqvarna Fleet Services app. Its integration within the system ensures that the self-driving mower is also effectively protected against theft. With an overall concept that is thoroughly well engineered, Husqvarna is showing the way for other equipment manufacturers in this sector.

A highly effective concept, and in their evaluation of the DUST STOP the panel of judges kept asking themselves the same question: “Why did no one think of this before?” The elastic sleeve that has been designed for use with disc brushes on scrubber cleaners ensures that, unlike with standard disc brushes, emissions of fine dust are reduced by up to 90 per cent. This is described as representing a genuine quantum leap in work safety and in protecting the health of cleaning operatives. The judges were particularly impressed by the simplicity of operation, by the wide range of applications for the DUST STOP, and also by just how uncomplicated and economical it is to retrofit on existing systems. And to top it all off, this product also results in an improved cleaning performance.

ADLATUS TEAMS 2020 is a man-machine interface, supported by AI, that creates a team comprising a human facility manager and his autonomous robot assistants. The intelligent networking of the systems enables an extensive range of cleaning tasks to be undertaken by variable cleaning fleets. This can significantly boost productivity, especially when large areas are being cleaned. With ADLATUS TEAMS an efficient division of labour can be achieved: working largely on their own, the robots can tackle time-consuming and strenuous work, while the human members of the team monitor the various processes and can focus on those tasks that cannot be carried out by robots alone. In view of the fact that the shortage of skilled staff makes the role of human operatives all that more important, the panel of judges were particularly impressed with ADLATUS TEAMS because of the way that it creates an enhanced perception of the cleaning industry as a forward-looking area of work..

The 11 competition entries that made the final round will be on display at a special show at CMS in Hall 6.2. At 65, the number of applications made for this year’s PIAwas a new record.